Somalia’s President Mohamed Abdullahi Mohamed has appealed to foreign banks to ease restrictions on the country’s financial institutions to help it rebuild its economy.

He said financial institutions in the country are struggling to access their external counterparts due to barriers set by the international community, despite the strides the country has made in ensuring stability.

President Abdullahi, while giving the opening speech during the London Somalia Conference 2017 on Thursday, said his administration will take measurable steps to unlock the nation’s potential, which will be done by removing barriers that discourage investment, and promoting small and middle enterprises.

“When it comes to economic development, the greatest asset we have is the entrepreneurial spirit of my people.

“The money transfer businesses, which send a combined amount of about $2 billion (Sh412bn) a year to Somalia, are struggling to access banks here in the United Kingdom and in the United States of America due to the severe restrictions placed on them,” he explained.

Additionally, he commended the resilience of his people for persevering with tough times such as drought and war, among others, and money transfer agencies such as Dahabshiil – which operates in Europe, America and in the Middle East – that makes it possible for diaspora citizens to send money to their families back home.

Thus, he asked the global community to help rebuild the economy of the country by facilitating access to financial institutions.

“Time has come to facilitate access for our financial institutions to work with your banks.

“A continuation of the current policy will undoubtedly deprive crucial access for our banks, and, as a consequence, will limit employment opportunities in the financial sector,” he said at the forum attended by British Prime Minister Theresa May, UN Secretary General António Guterres, AU chairman Moussa Faki Mahamat and other leaders. 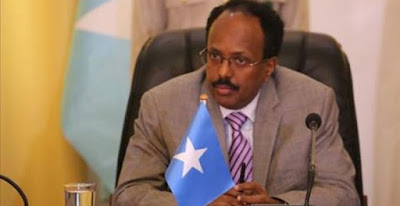