ROME — Drought-ridden Somalia is at risk of a repeat of the famine that killed nearly 260,000 people in 2011 if aid is not stepped up over the next two months, United Nations agencies said Wednesday, calling for more funds.

Five million Somalis do not have enough to eat because of a lack of rain that has led to poor harvests and livestock deaths, according to the U.N.

With initial forecasts predicting a third consecutive poor rainy season in April, early action is key to prevent the situation from getting as bad as in 2011, experts at three U.N. aid agencies said in phone interviews. 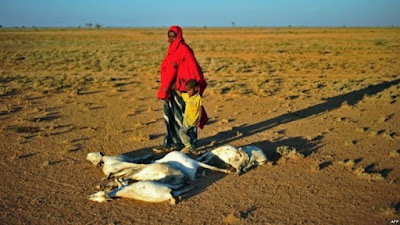 “We really need to move now before we see the catastrophe of 2011 [repeated],” Shukri Ahmed of the U.N. Food and Agriculture Organization (FAO) told the Thomson Reuters Foundation by phone.

In 2011 the humanitarian response was too slow and tens of thousands of people died before the famine was officially declared in July, Ahmed said.

The crisis was worsened by conflict and a ban on food aid in areas held by Islamist militant group al-Shabab.

The current drought is more extensive than in 2011, affecting the whole of Somalia as well as parts of Ethiopia and Kenya, said Arif Husain, chief economist of the World Food Program (WFP).

Agencies are better placed to respond now because improvements in security and governance allow access to more regions, said the head of the U.N. Office for the Coordination of Humanitarian Affairs (OCHA) in Somalia, Justin Brady.

Preparations started early, with two drought warnings and a pre-famine alert issued over the past 12 months, but more funds are needed, he added.

“We have a very good chance to avert a famine in Somalia if the resources are there,” he said.

Brady said OCHA had appealed for about $300 million in aid for the first three months of 2017, but only about a third of the sum has so far been identified.

“What we spend now is going to be a minor amount of money compared to [what we would need] if we allow the situation to get further out of hand,” he said, urging more donors to come forward.

Funds would be used to secure water points, fight rising cereal prices, stock up feed for livestock and tackle the spread of diarrhea, cholera and measles, among other measures, the agencies said.

“This time around we are hoping that … we will be in a position to respond better and more quickly,” said Husain.

African Union and Somali troops have driven al-Shabaab from major urban strongholds and ports, but they have often struggled to defend smaller, more remote areas from attacks.