In a series of crude and sectarian outburts on Twitter this weekend, Lieutenant General Khalfan - who holds one of the most important positions in Dubai - threw his weight behind Trump's immigration policy targeting Muslims.

The former police chief and now head of security in the emirate then railed against Iraqis, Yemenis, Somalis and Iranians - nationalities all included in new US travel restrictions.

"We completely support Trump in his ban on entry to those who may cause a breach in America's security," the security chief said on Twitter.

"Previous US administrations have embraced all the wanted men of the Arab world and those classified as terrorists. Trump, what you're doing is right."

The comments - from a man closely linked to UAE rulers - sparked outrage among Twitter users in the Arab world - most of whom view the travel ban as racist and Islamophobic.

It has also been interpreted as reflecting official Emirati view on the Trump ban, particularly as Trump held a phone conversation with UAE Crown Prince Mohammed bin Zayed on the same day.

Passport holders of seven Muslim-majority countries are now barred from entering the US after Trump's executive order signed Friday night.

Rather than criticise the ban affecting millions of fellow Muslims and Arabs, the UAE national described those affected by the policy as "lazy" and "not worthy" of entering the US.

"America doesn't have to accept different people, they've already taken in many before. Unproductive groups don't deserve to be in America - Iranians or Iraqis or Somalis," he said.

He went on to describe Shia groups in Iraq and Yemen as "disciples" of Iran's Supreme Leader Ayatollah Ali Khamenei and "not Arabs".

"If you think your head is raised higher than us in the Gulf, you better lower your head," he said.
Khalfan also targeted Shia-majority Iraq in an outburst widely viewed as sectarian.

"What do you expect from Iraq, they insult the mother of believers [Prophet Mohammed's wife Aisha] and killed Hussein," he said.

"Their slogan is 'death to America', and they're dying to go to America! Chatterboxes. You showed them, Trump."

Khalfan then mocked the war and poverty afflicting Iraq, where battles are raging between Islamic State group militants and pro-government forces.

"Those from those countries should stay there and not travel to the First World. The Iraqi can't water al-Basra [city] and [he has] two rivers."

Lamenting about the days of Saddam Hussein - a dictator responsible for the deaths of hundreds of thousands of Iraqis - Khalfan said the Iraqi leader kept Iran from "threatening the Gulf".

"Those were the days of Saddam and before [Iran's leader], now threatens the Gulf," he said.
Ironically, the comments could technically land the police chief in hot water, as the UAE has anti-hate speech laws in place.

The law allows for jail time and hefty fines for people found guilty of insulting people based on race or religion.

In 2015, Khalfan launched the first hate speech case against a Saudi writer, Mohammed al-Hadif, who had criticised the UAE's military involvement in the Yemen war.

Human rights groups believe the law is in place to limit free speech and jail critics, and is unlikely ever to be used against influential public figures such as Khalfan.

Trump's travel ban has left hundreds of green card holders and dual US nationals stranded outside America or locked in airports.

Syria, Iraq, Sudan, Somalia, Libya, Yemen and Iran nationals were all included in the ban, while the US also blocked the entry of refugees to the country.

Washington also said Syrian Christians would be given priority over Muslims, adding to suspicions Trump's ban is largely Islamophobic in its motivation.

This has not stopped Khalfan from throwing his support behind Trump, despite the UAE being initially reticent about a victory for the Republican front runner.

Khalfan has been associated with a number of controversial comments in the past. 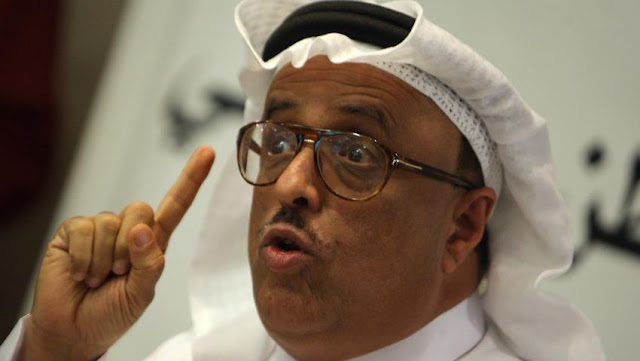 Last week he slammed a visit by socialite Kim Kardashian to a special needs centre in the UAE.

"We do not need the presence of Kim Kardashian in charity centres... charities (should) invite good people, and thank God we have plenty of good people."

He said he would probe the visit to the charity, believing it was unauthorised.

The security chief also called for the UAE to annex Gulf ally Qatar, engaged in a Twitter war with the country's Foreign Minister Abdullah Bin Zayed al-Nahyan, and blamed Israel for downing a Russian airliner over Egypt.