Home » News » AMISOM troops hailed for their role in Somalia

AMISOM troops hailed for their role in Somalia

AMISOM troops hailed for their role in Somalia

AMISOM Force Commander Lt. Gen. Osman Noor Soubagleh has heaped praise on AMISOM troops based in Kismaayo for the remarkable work they are doing in securing Jubbaland State.
The Force Commander was on an inaugural tour of Sector Kismaayo, where he held consultations with Jubbaland senior leadership, AMISOM sector commanders and senior officials from the Somali security forces.
The talks focused on strengthening security across the state. He urged the security forces to enhance their vigilance as the country starts the electoral process.  Accompanied by the Deputy Force Commander Major General Nakibus Lakara and other senior military officials, the Force Commander toured AMISOM’s  multi-national bases situated in Kismaayo.


“AMISOM’s key role will be to secure electoral venues in order to achieve a peaceful electoral process and manage the threats posed by the Al-Shabaab. We will work hand in hand with our colleagues from the Somali security forces,” Lt. Gen. Soubagleh said.
The President of Jubbaland State Ahmed Mohamed Islam Madobe expressed satisfaction with the troops and in other joint military efforts going on in Jubbaland.
“We are hoping of a peaceful electoral process in Jubbaland State and Somalia as a whole. We have put security measures in place and sensitized the electorate. We also request the international community to send observers in the upcoming electoral process for transparency,” stated President Madobe.
Also present was the SNA Deputy Commander of  Jubbaland State Colonel Mukhtar Aden Isse who attributed the peace and security witnessed in Jubbaland to the good working relationship between AMISOM and SNA. “AMISOM and SNA have redoubled their efforts in readiness for the electoral process and security maintenance in Jubbaland State.
This has been ongoing commitment by our troops. We are also making progress in our preparations in taking on the enemy and liberating the areas under their control,” said Col Mukhtar.  AMISOM is committed to securing the electoral process in Somalia that will ensure the legitimate transfer of power later in the year. 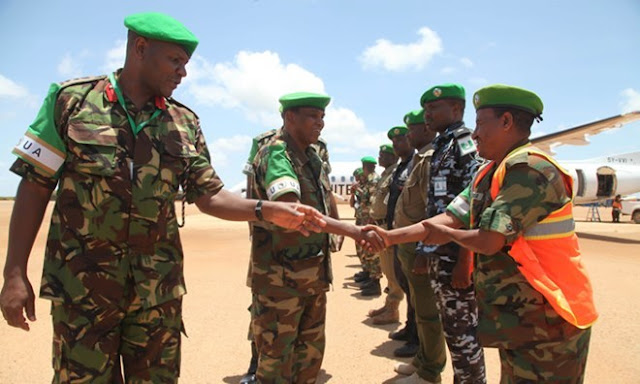