Amisom deputy Nakibus Lakara with KDF soldiers. Photo/COURTESY
KDF officers in Amisom supported by the Somalia National Army killed 33 al Shabaab fighters in two different operations in Southern Somalia on Wednesday.
In the first incident during an operation in Jubaland’s Gobweyn area, 25 fighters from the terror group were killed by the two teams.

Three of the terror group’s technicals were also destroyed in the operation targetting their main attack launching base.
Reports indicate the 25 members of the terror group were killed during an offensive against al Shabaab camps near Kismayu in which Amisom troops surrounded the terror gang’s positions at Wirkoy bridge about 40km from Kismayu.
Meanwhile, a KDF elite team that had captured an al Shabaab logistics boss in Kiunga area repulsed an attempt by his accomplices to rescue him. Eight militants were killed. 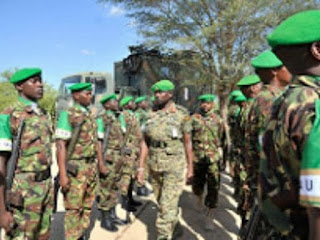